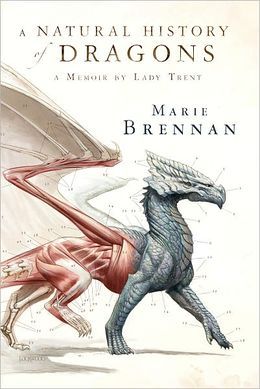 Never had I ever thought I would love this kind of book.

The protagonist, Isabella, is an incredibly headstrong and inquisitive child (and later, a young woman) with a sharp sense of humor.  She has a natural curiosity for dragons and wishes to learn as much as she can about them. Sadly, though, there isn’t a whole lot out there about dragons for obvious reasons: they are hardly the tame sort of beasts one can study at leisure. For a woman in those historical times such a passion is especially difficult to pursue.

What follows is a splendid, adventurous tale of an excursion to study dragons, interactions with local peasants and disrespectful maids, tales of evil monsters and draconean gods, smugglers and historians, and through this all, not one bit of delicate, feminine disposition. This was a thoroughly enjoyable read. Something along the lines of Indiana Jones, if you get my meaning. Only, you know, with dragons.

At times, the story progressed rather slowly, but since it was written so well I did not mind. That does not imply that this was a dull read: a great many things happen to (and around) Isabella, most of them distinctly unpleasant. I must agree with Dagmira here (the disrespectful maid), ‘You [Isabella] bring trouble.’

I do so try to write a spoiler free review but alas this one is not going to be one of those. That is because I want to talk about something that happened in this book that tore me apart. So, flee, those of you who wish to read this book, for I am about to spoil it for you.

I want to talk about Jacob Camhearst. See, when I began reading I saw that Isabella was called Lady Trent. So naturally I assumed that that must be the name of the man she marries. But then she goes on to marry a one Mr. Camhearst and dashed that theory. But then I wondered whether she re-marries later on in some other book or whether she receives the title herself. Either way, for her to be Lady Trent meant that she would no longer be Mrs. Camhearst. I have only finished reading the first book as I write this review and all these thoughts are running through my head. I guessed that Jacob would meet a most tragic and untimely demise.

I was right. But I thought it would happen BEFORE I started to like him. BEFORE he makes it clear that he wants her to explore her passion and that he will not stop her in anyway but support her in every way. BEFORE he protects and defends Isabella every step of the way, against everyone. BEFORE he was portrayed as the nicest man in the history of mankind.

I fell in love with Jacob Camhearst. And I did not realize it until he died.

I will be honest with you, dear reader, I stopped reading the book then and had a long, heartbreaking cry. I haven’t cried for the death of a beloved character in a while now and it took me a while to get out of it.

Does this mean I did not like the book? Dragon poop! I loved the book. And I will get around to reading the others, soon enough.

View all posts by bespectacled imp

For my International Readers: